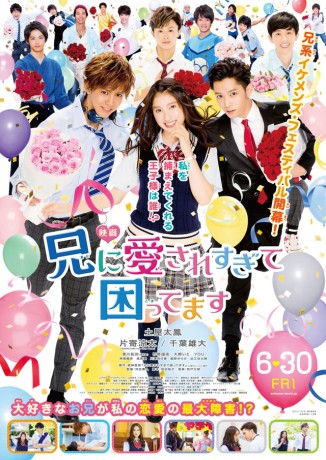 So, in my attempt to revive Movie Mondays, I started watching clips on youtube and I happen to come across this one. You know me, I always use good-looking actors as a reason to watch that’s why when I saw the clip for this one I immediately started looking for the movie. Before we dive into that, I just want to let you know that there is a drama for this one as well. It’s like a prequel or like an introduction to the characters and it has 5 episodes that show how the relationships go about. Alright, I know the title sounds incestuous and wrong on all sorts of wrong but I don’t know it kinda drew me in. (Reason being, I wrote something like this before on my AFF and it was a mess but I enjoyed writing it.)

Story: The story revolves mainly around Setoka who is a high school student that falls in love easily and her older brother Haruka. As the title says, Haruka is very protective of Setoka and Setoka loves him back. Their relationship as siblings is great and they get along very well but Haruka is just too overprotective to the point where he scares off most of the boys that get involved with his sister. He says that he’s the only person allowed to make her sister cry so if them boys hurt her, he is going to hurt them back.

During all this chaos, Setoka’s first love and Haruka’s friend, Takane returns to town and woos Setoka into being his girlfriend and well this is where the story gets more interesting… Haruka confronts his friend as an attempt to leave his sister alone and he tells him something he’s afraid to admit.

My thoughts: (I’m weird but) I love this movie so freaking much, I love complicated love lines and love stories and this one is as complicated as it gets. Forbidden love for me is so hard to achieve especially in written form because you really have to plan out how it ends and of course, you’d want the leads to be together too. SPOILER ALERT: There’s this scene where the four of them (Setoka, her brother, and her two suitors) went to like a festival at a temple and the three guys took turns to show Setoka around. When it was Haruka’s turn, there’s this scene where they were about to part and he held her hand so tight and their eyes met. You can really feel the IST (Invisible Sexual Tension) between the two of them and you just wish that they’re not related at all. That’s just one of the many scenes where IST is involved and up to this day, I still watch clips of this movie and it still gives me chills.

Do check this movie out if you haven’t and let me know what you think ^^v. Happy Watching ~