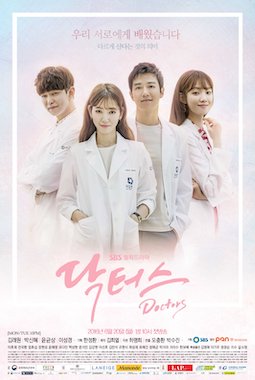 As I suffer from flu and bronchitis, I decided to watch this drama 3 days before I go back to work after being on leave for a week. I know, I make the worse decisions ever. Anyway, I wasn’t really planning on watching this however I got bored so I started on Cinderella and Four Knights but then I have to wait so I just went for the next best thing, to watch a finished drama and that was Doctors.

I was intrigued at why this drama gained so much attention and when I saw it, I understood what the fuss was all about. The actors in this drama are not your typical actors and actresses, heck they’re portraying people who can make you live for 10 minutes more if you’re in a brink of death or accidentally kill you when you have your whole life ahead of you. I am telling you that this post might be a little biased but I will try my best to give an honest rating :).

Cast: Let me begin by saying that this contains elements of fangirling, buried feelings that came to life and bits of spoilers. So, this drama is my official comeback to the medical drama. I don’t consider Descendants as one because most of the scenes were not in the hospital unlike this one… Anywhoo, my last one was Emergency Couple, I think we all know what happened after that. Let’s start with the man I have been crushing on since forever, Kim Rae Won as Hong Ji Hong; Hong Hong Hong! Omg I love that nickname of his. Rae Won is one of those actors who I would want to be with, you get me? Like he’s that kind of person that would do anything for you and who would melt your whole existence with that smile of his. [I swear, his smile is contagious.] I have seen his past dramas Cat on the Roof, Love Story in Harvard and Which Star Are You From and his roles there were similar to his role here. You know that cute guy from college who’s smart casual; the playful and funny but hella smart? That! He’s the man that I would take home and introduce to my family. That kind of man. Going back to topic, I think he suits this role as a professor/doctor because he really looks like one to be honest, he portrayed it very well and the chemistry he had with Park Shin Hye is the bomb. Park Shin Hye as Yoo Hye Jung; this girl did an amazing job at this drama and I haven’t seen much of her dramas but when I do, I fall in love with them. She’s the kind of actress that I like watching because she can transform herself yet she still has that Shin Hye factor. Now, for Lee Sung Kyung as Jin Seo Woo; This girl I haven’t seen in dramas before this one, I did encounter her at Running Man at some point since I think she was Gwang Soo’s partner in It’s Okay, It’s Love (I have yet to see this drama) so I can’t really give out a proper basis but I did like her here. She was convincing and the way she portrayed her character was excellent (I actually hated her at some point) and I can’t wait to see her in another drama. Yoon Gyun Sang as Jung Yoon Do; This man is super cute in this drama and this is probably the first time I’ve seen him before as well but I became fond of him as the drama ran. His character has that cool factor to it that makes you want to hate him but you can’t. I also have to give a shout out to the other characters and the cameos, all were just great and they were cute and just UGH. Really great cast.

Story: Okay. Let me try and break this down for you without spoiling much… This drama focuses on Yoo Hye Jung particularly and how she transformed from a girl with no direction to a good arse doctor. Along the way, she crosses paths with Hong Ji Hong and well let’s just say that he had a huge part in that change of hers that led to a relationship. Now, I particularly like this story because their relationship is something uncommon to most people yet very romantic in a way. I love that they can balance out the gap and the philosophies, and over the years she eventually caught up to him professionally and of course mentally. Although she isn’t that mature yet, you can sense that she is a little advanced for people her age and that I think is what made me watch this drama.

I am not a big fan of hospitals but I am fascinated by doctors, still. When I was younger, I wanted to become a doctor myself, a neurologist too but that all went down the drain when necrophobia kicked in. So, seeing two neurologists fall in love, have common ground and be an adorable couple made me feel like this is my untold love story LOL. Seriously, I think that the transition in their relationship from that from the past to the present shows that life is not a race. He may be in that level of authority now but in the end, she caught up to him and now they love happily ever after.

Hong Ji Hong & Yoo Hye Jung (Kim Rae Won & Park Shin Hye) – Okay. Let us first acknowledge the fact that this is a forbidden relationship, much like to Romeo and Juliet. Let’s face it, we all thought that this would be impossible but SBS and Korea broke everyone by pulling this off. Their love story is worth telling as it consists of a lot of elements you wouldn’t think mattered. For example, Hong Ji Hong’s desire to turn Hye Jung into a student, have her study and encourage her to do it turned to something much deeper than what he imagined. What I really liked about this as well are the actor’s chemistry with each other, they actually look well together despite that age gap and there was no awkward moment in it as well. There is this one scene that I really love, in episode 13 where he introduces her to his friends as his girlfriend and like she hesitated for a second but like she was all for it. He basically turned from an angry friend to a romantic boyfriend in a fraction of a second.

SO FREAKIN ADORBS! I wish that we can have more of them in the future. I love their onscreen chemistry so much and their offcam bonding is cute as well. I have seen some videos myself and they are adorable!

Hong Ji Hong & Jung Yoon Do (Kim Rae Won & Yoon Gyun Sang) -Bromance alert you guise! These two are hilarious in the drama. They started out as rivals and ended up being friends and one of them giving up on his love for Hye Jung. What makes this bromance work though is the fact that they are willing to help each other for the sake of goodwill, pushing aside their feelings. That alone makes this a very mature bromance!

Yoo Hye Jung & Chun Soon Hee (Park Shin Hye & Moon Ji In) – This reminds me so much of my friend and I when we’re together. The silly things that we talk about and the secrets that we share are infinite. They also are like the sisters who can have faults, who bicker and are not really that perfect. They fit in with each other’s personality and they have trust with a whole lot of loyalty and that I think is what makes a friendship last.

Jin Seo Woo & Pi Young Kook (Lee Sung Kyung & Baek Sung Hyun) – This pair on the other hand, was not originally in my list because on the first parts of the drama, I knew that Young Kook had a thing for Seo Woo, it’s real obvious to be honest and I want to punch her for not noticing his efforts and stuff because of her feelings for another man. Then later on, their relationship started to turn into something that I can handle which is they’re friends and he made it aware that he has indeed cared for her in a different way and I think that it’s super adorable and just giddy that they ended up together. I was cheering for them to be together and it happened so I am a happy shipper.

Yoo Hye Jung & Kim Soo Chul (Park Shin Hye & Ji Soo) – This one I thought was the most adorable one. Everybody knows the saying that it’s rare for a man and a woman to be “just friends” and this one is the buster of that myth. Interesting enough, Soo Chul did have a crush on Hye Jung but she’s really not interested in having him in her life. I actually thought they eloped after she rode on his motorcycle the second time but like what happened was purely a human act. He helped her and then that’s it. I remember that episode where they caught up and the two [Ji Hong and Yoon Do] were jealous of him and how he can act so natural with her and that’s just it I mean they had this moment.

I wanted to include more but like this might turn out to be longer than my usual one. LOL.

My Thoughts: I give this a 5/5. Okay I know I didn’t give out a perfect score yet but this one for me had everything that I was looking for. The plot was okay and the story line for me wasn’t too extreme. It balanced out the characters and the emotions as well. It’s just that I can’t pick on something rather than I want more. I also give kudos to whoever had the idea of a student/teacher relationship. That was still for me is a first, I guess since I haven’t seen a drama like that before [maybe this existed waaaaay back and I just didn’t see that drama] but yeah. This was a good watch and I am still not over it because it’s too adorable and giddy. It gives me butterflies whenever I get watch clips of it on youtube. If you haven’t seen this drama, I suggest that you give it a go. Despite all the blood and operations and stuff it’s a good watch.

If you have seen this drama already, what did you think? Did you like it? And if you’re going to watch this, I wish you Happy Watching ^^. *I actually started reviewing this drama weeks ago and finished it just now Orz. so my into isn’t really that updated. Sorry.*