So… I was going to review another drama but, it would be wrong not to follow a pattern. This is the most recent drama I have watched… so, my memory is a little fresh from all the things and stuff. First of all let me start by saying that I was really not planning on seeing this, I heard that this was a horror drama with all the ghosts and everything so I decided on staying away. I got Heirs instead but I deleted the whole drama because I asked a few people if it was any good and my reliable drama watcher/reviewer [who is my aunt] told me that it was the same old Korean story [meaning : rich guy, poor girl, quiet nice guy who helps girl and likes her at the same time, rich guy meet nice girl, angry parents/grandparents/relatives. rich guy gets poor girl. nice guy interferes… etc.] so I just bushed off the thought… even if it stars Lee Minho.
First of all, lets talk about the cast. Gong Hyo Jin, So Ji Sub, Seo In Guk and Kim Yoo Ri; besides Hyo Jin and In Guk, this is the first drama I get to watch with Jo Si Sub in it or Kim Yoo Ri [I might have seen her in other dramas but I have a poor memory when it comes to women]. I love Hyo Jin in Greatest Love, she was so great in it and she was so much fun in this one as well. She fits her character nicely and she did a great job with all the ghosts stuff. So Ji Sub, Oh my goodness… he is the best! his character in this drama it the funniest and coolest person ever! I was smiling the whole time and laughing because he was so good at it!

Seo In Guk, dear heavens… his character here is a Head of the Security Department, so obviously he wears a coat and tie most of the time in the drama and *squeals* he looks so good in it, plus he has action scenes which is not helpful for my poor heart and feelings for him, moving on. Yoo Ri, good-looking girl, very playful character and so adorable in this drama!

The Story; Before anything else, this was written my the famous Hong Sisters… I know that Big wasn’t their best execution but this drama made up for all the big mistakes in the Big drama. This was so well written, the plot was great, characters are so cool and just the concept was really far from what everybody is used to. Ghosts, main point of the story [spoilers] she can see ghosts, that’s what I was afraid of… I remember mentioning in my Arang review [ HERE ] that I had the same ability, so me and ghosts are really not a good combo when it comes to these things. Now, she meets mister Joo Joong One [Joo Joong Won] who apparently makes the ghosts disappear whenever she touches him and that is how our little story on these two begin. As for Inguk’s character, Sticky Kang Candy/Kang Woo [you’ll find out how he got that name when you see the drama] he meets our lead Ms Tae Gong Shil or Taeyang when he decided to live in the dorm she lives and works in, first it’s just a mutual/no feelings attached relationship but as the drama progresses he develops feelings for her. Lastly Yoo Ri, she’s a famous actress or personality who went to the same school as Tae Gong Shil and was called the Little Sun, so basically she was not the most popular person when they went to school together.

Pairings, Kang Woo and Drama Watcher… no wait, sorry 🙂 Kang Woo and Gong Shil, Kang Woo is the sweetest guy and he is all out and about with his feelings for her. There’s this one time Gong Shil was being followed and then he flies in and then rescued his damsel, gaining him points for being all manly and cool and lovable and stuff. I really wish he was my boyfriend so when like there this one guy that keeps touching you and you go “stop! don’t touch me!” and then he magically comes and shouts “DON’ T TOUCH HER!” and then the guy says “WHO ARE YOU?” and then he replies “I’m her boyfriend! Wae?” and then as he walks over, he karate-s his way and puts you safely under his arms! [I’m watching too much dramas obviously… *sighs*] 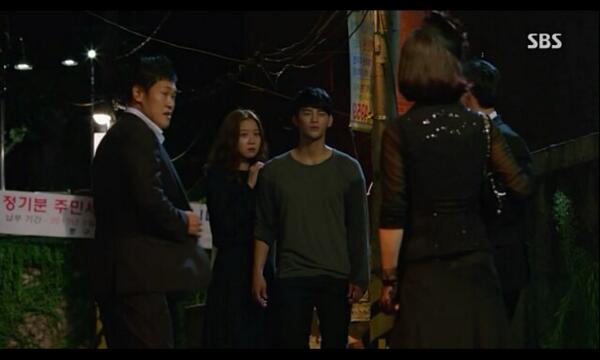 [I mean look at that stance! that is just deadly, with one of the sleeves pushed and the other loose and with the ready to have more action face. he is to die for.]

Before I faint and go out of the topic, lets move on to Gong Shil and Joong One. This is the I enjoyed the most, I swear on the shirt Inguk is wearing… they are so adorable! I like how Joong One is all jealous but he shows to her that he doesn’t care but he actually does. This pairing is literally what the title is [Master’s Sun] ; Mister Kim,  Joong one’s assistant calls him Master most of the time and Gong Shil who is also known as Taeyang w/c means Sun in Korean. They’re like literally what the title is, and to be honest the meaning is more than what it is, and you have to see why Taeyang is called Taeyang and how she became like that. Kang Woo and Tae Yi Ryung, most adorable pairing really. I am just smiling like a fool whenever Yi Ryung tries to make Kang Woo eat with her, it’s just so fun to watch and also you see the progress of Kang Woo being the bad ass to the somewhat caring and worried person he really is, and I also like how this pairing went!

This is a good watch! I am a big fan of the Hong Sisters and I must say this is why I love their works, I saw Choon Hyang, You’re Beautiful, My GF is a Gumiho, Greatest Love, Big and a peek at My Girl and I was never let down… well except for Big tho, that was really wrong for me [I found out that the drama was an adaptation of the movie with the same title that stars Tom Hanks {link}. I saw the movie on TV but I didn’t watch it] it was a bummer tho because I really love Gong Yoo and yeah… Lastly, this can never be complete without the wonderful OST. The track Touch Love by Yoon Mirae is the best so get the OST too while you’re at it because you get to hear it so many times in the drama that your ears just want to listen to it more!

=A/N : If you notice, I made a format for the recent reviews : Cast, Story, Pairing and OST if its possible. I will be following this format from now on and hope to give an organized and fun review! Thank you to everybody who has been reading my drama reviews!=